iSCSI is a popular protocol for block-level storage access, where the iSCSI initiator (client) communicates with an iSCSI target (storage server) over the network. The iSCSI target provides storage to the initiator in the form of one or more LUNs.

iSCSI can be leveraged to provide persistent storage to containerized workloads. In Kubernetes, iSCSI initiator operations are managed by processes running directly on the worker nodes. But there are situations where managing such initiator operations from within containers becomes essential. Developing storage plugins as a container for Container Orchestrators and running the kubelet within a container are popular use cases. For example, currently Docker Kubernetes Service (DKS) runs the kubelet as a container and provides support for the in-tree (shipped with Kubernetes) iSCSI plugin for Linux workloads.

However iSCSI components were not designed with containers in mind, which makes managing iSCSI from within containers tricky. In this blog, we are sharing the different options that were explored to be able to containerize iSCSI on Linux.

The iSCSI kernel modules implementing the data path are loaded and managed as part of the host kernel.

Kubernetes uses iscsiadm to execute iSCSI commands on the node. For example, kubelet performs the attach and detach of a persistent volume to a node as well as the mount and unmount of a persistent volume to a pod by exec-ing iscsiadm commands. Apart from the in-tree plugin, iSCSI is also supported by CSI (Container Storage Interface) plugins.
iscsiadm works in conjunction with iscsid and the iscsi kernel modules. iscsiadm and iscsid communicate over a Unix domain socket. iscsid communicates with the kernel modules over a netlink socket. It’s worth mentioning that the netlink control code in the kernel is not network namespace aware (1) 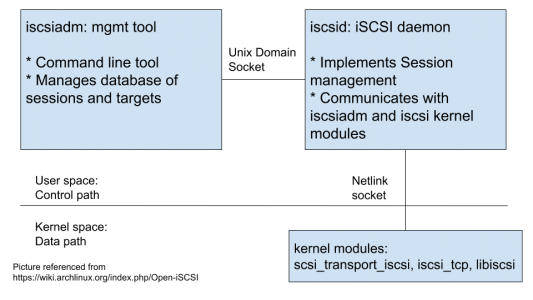 The case for containers

There are some cases where the call to the iscsiadm binary is made from a container and not from a host process. For the rest of this blog, we will refer to such containers as “iscsiadm containers”. Popular use cases for managing iSCSI from a container are:

Typically, there are two components to a CSI Volume Plugin, the Controller plugin and the Node plugin. It’s common practice for such plugins to be deployed as Kubernetes Deployments (Controller plugin) and Daemonsets (Node plugin). Hence, a CSI plugin supporting iSCSI should be distributed as a container capable of issuing iscsiadm commands. Note that iscsiadm is invoked by the CSI Node plugin.

These dependencies imply that the container should have access to the libraries as well.

Choices for packaging and runtime

There are several options to package and run the iSCSI components. We ran experiments on an array of Linux distros with different base images for the iscsiadm container. We’ve outlined our findings in the following three options:

Install open-iscsi package in the iscsiadm container. Run the container:

Install open-iscsi on the host, run iscsid on the host. Run the container bind mounted with host root filesystem (docker run -v /:/host <container> <entrypoint>). Then use either of these solutions:

Add this file to the container image and grant the right permissions.

This ensures that every invocation of iscsiadm by the container calls the above chroot script. NetApp Trident uses this solution to containerize their Docker Volume Plugin.

Options 1 and 2 do not work when multiple Linux host distributions need to be supported in your solution. Option 3 is a clean way to support containerized iSCSI environments across a heterogeneous set of Linux distros. Choosing option 3 above ensures that dependencies in different Linux host distros are handled correctly.

Running into roadblocks while containerizing iSCSI environments is expected. We ran into several while building iSCSI support for Docker Enterprise 3.0 and have documented our research and best practices here. We hope that this is a useful guide for storage plugin authors and upstream kubernetes developers.

0 thoughts on "Road to containing iSCSI"